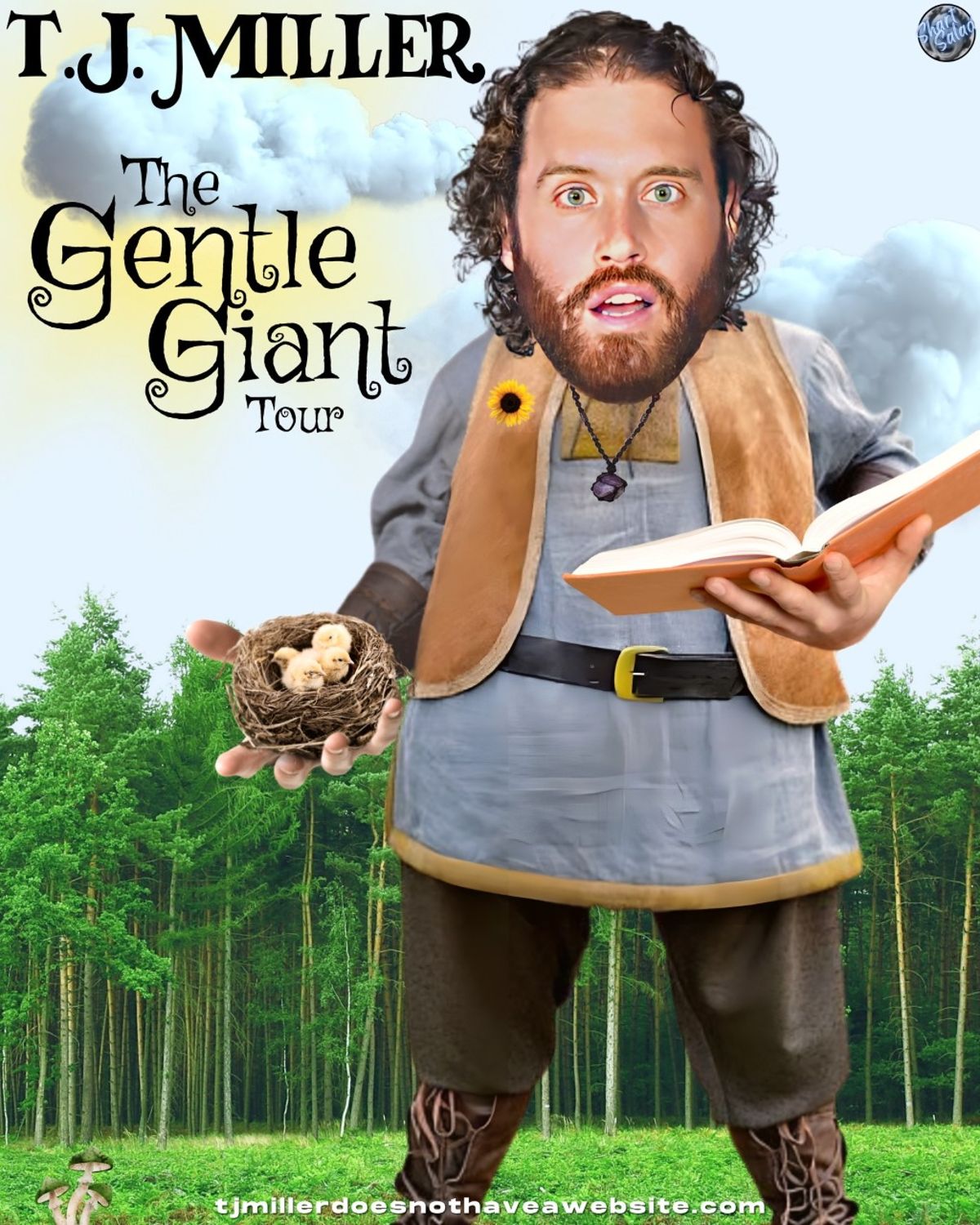 T.J. MILLER is one of the most sought after comedians in the world, certainly the northern part of the western hemisphere. He has been diligently working to make people laugh for over fifteen years, and is driven by the altruistic mission statement that life is fundamentally tragic and the best thing he can do is provide an ephemeral escapism from that tragedy by doing comedy. He has been performing his absurdist observational standup act worldwide and has never gone to the bathroom in his pantaloons on stage. His act has been described as “a one man philosophy circus.”

His hour-long comedy specials T.J. MILLER: DEAR JONAH, T.J. MILLER: NO REAL REASON (Comedy Central) and T.J. MILLER: METICULOUSLY RIDICULOUS (HBO) are available to stream now wherever streaming is streamed. For no reason he produced two music albums, THE EXTENDED PLAY E.P., a hip-hop/pop/folk music E.P. with 41 tracks, and THE ILLEGAL ART REMIXTAPE- available now on iTunes and wherever fake music is sold. Miller’s voice stars as Gene in the EMOJI MOVIE and Fred in Disney’s Academy Award-winning animated feature, BIG HERO 6. Miller also talks like an old drag queen after a hard night of chain smoking, and thus has voiced many characters including the character Tuffnut in the Oscar-nominated animated films HOW TO TRAIN YOUR DRAGON and HOW TO TRAIN YOUR DRAGON 2. He played Auggie in the first R-rated stop motion animated film HELL AND BACK with Nick Swardson and Prancer in ICE AGE: A MAMMOTH CHRISTMAS. In television, he voiced Robbie from GRAVITY FALLS, Tuffnut in How To Train Your Dragon’s DRAGONS: RIDERS OF BERK, Brad in HIGH SCHOOL USA!, Randy in F IS FOR FAMILY and a volcano in FAMILY GUY. Don’t forget about GORBURGER, a show so strange you’ll just have to google it. He has had 2 short films he wrote, produced and starred in selected for Sundance- SUCCESSFUL ALCOHOLICS and I’M HAVING A DIFFICULT TIME KILLING MY PARENTS.

You may recognize his non-animated face and body from his roles in DEADPOOL 1 & 2, the highest grossing R-rated films of all time, 2014’s surprise indie hit TRANSFORMERS 4: AGE OF EXTINCTION, Pete Holmes’ HBO comedy series CRASHING, Mike Judge’s HBO comedy series SILICON VALLEY, for which he received the Critics’ Choice Award for Best Supporting Actor in a Television Comedy, Uncle Jake in THOSE WHO CAN’T, GARFUNKEL AND OATS, THE LEAGUE, HAPPY ENDINGS, appearances on KIMMEL, FERGUSON, COLBERT and CONAN, or even THE GOODWIN GAMES which was canceled after 7 episodes (he was also on CARPOOLERS with Jerry O’Connell and that lasted 13 episodes). When CHELSEA LATELY was a show, T.J. was on it quite a bit and even guest hosted for Chelsea. A ‘regular’ some might call him. Who those people are he’ll never know.