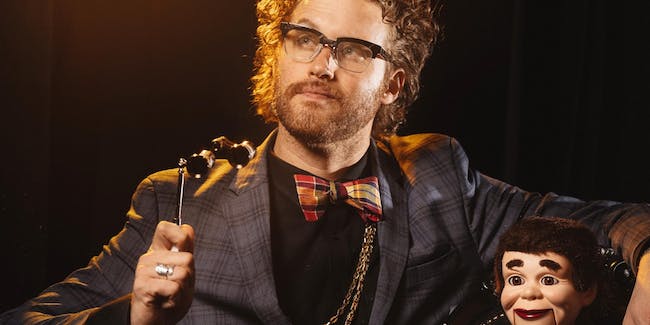 iCal
Google
T.J. Miller is one of the most sought-after comedians in the comedy world, but not in the drama world, or the finance world.

T.J. Miller is one of the most sought-after comedians in the comedy world, but not in the drama world, or the finance world. He was named one of Variety’s “Top 10 Comics to Watch,” and EW's “Next Big Things in Comedy.”

His podcast "Cashing in with T.J. Miller" is listened to by 12 and ½ people, and he is a nationally touring standup artist, crisscrossing the country listening to Kris Kross. He has been performing his absurdist observational standup act for over 10 years and has never gone to the bathroom in his pants on stage.

His hour-long Comedy Central stand-up special “T.J. Miller: No Real Reason” and hip-hop/pop/folk music album "The Extended Play E.P," an E.P. with 41 tracks, and the “Illegal Art Remixtape” are all available now.

He hosted Comedy Central’s “Mash-Up,” and has appeared on “Chelsea Lately.” Miller has been in several major studio films including “Cloverfield,” “She's Out of My League,” “Seeking a Friend for the End of the World,” “Rock of Ages,” “Our Idiot Brother,” “Yogi Bear 3D,” “Unstoppable,” and “Get Him to the Greek.” Miller also talks like an old drag queen after a hard night of chain smoking, and thus voiced the character Tuffnut in the Oscar-nominated animated film “How to Train Your Dragon” and “How to Train Your Dragon 2.” He voices Robbie from “Gravity Falls” on Disney, Tuffnut in the Netflix “How to Train Your Dragon” TV series, and “Gorburger,” a very strange show you must google to understand.

He resides in Hollywood, California, where he struggles to find meaning in an uncertain world. He is a comedian.