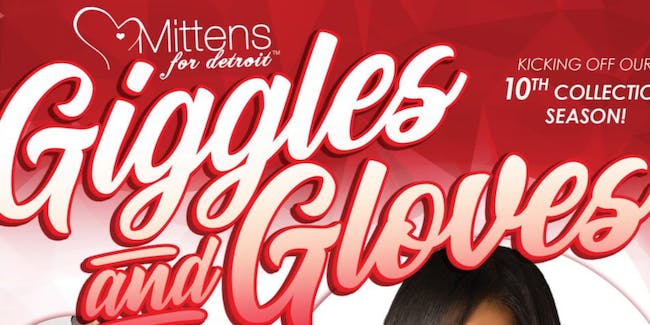 This year's headliner is Crystal P (CrystalPIsCrazy.com). Comedienne Crystal P. enjoys putting love and laughter in the hearts of many. Crystal P. has opened for Steve Harvey, "The Boss," Diana Ross, CeceWinans, Stephanie Mills, Frankie Beverly & Maze, The Whispers, The O'Jays, Chaka Khan, and many more. She has toured with Jonathan Slocumb's Cuss-free Comedy Tour; the Laughalujah Comedy Tour and has been a repeat performer at Gilda's Laughfest in Grand Rapids. Crystal P. has appeared on Showtime at the Apollo, America's Got Talent, Last Comic Standing and taped A Time to Laugh with Vickie Winans for B.E.T.

Featured again this year, is Billy Ray Bauer (BillyRayBauer.com). Billy Ray performed at Giggles and Gloves last year, and we are excited to have him back! Billy Ray has been a repeat guest on the Bob and Tom Show heard across America. He's also been heard on the Dick Purtan radio show in Detroit and Billy Ray was named best local comedian of the year by Hour Detroit magazine for 2017. Billy Ray has appeared with Drew Carey, Tim Allen, The Smothers Brothers, Lewis Black, Doug Stanhope, and many others.

Our emcee this year is Andy Beningo (andybeningo.com), new to Giggles and Gloves! Hailed for his clean and "every man" style, Andy has performed for Fortune 500 companies, on cruise lines, and in some of the top comedy clubs in the country. He has appeared on AXS Gotham Comedy Live, CMT's Next Big Comic and recently taped a comedy special for Drybar Comedy.

Be sure to be there when the doors open at 5:00pm, as we will have a casual dinner, silent auction, rafﬂes, and our Merch Shop until 6:30pm, with the show starting shortly after! This is an 18 year and older show, no exceptions.

Ticket prices are just $40, $50, $75, and $100, based upon where the tables are located in the room. There is honestly not a bad seat in the house! Table of 10 Sponsorships are available, at all ticket levels. There are a limited number of Event Sponsorships available. Please contact Wendy (Wendy@MittensForDetroit.org) for a sponsorship packet.

FREE Parking on Sundays in Royal Oak, and valet parking is available.

In our ﬁrst 9 Collection Seasons, MFD has raised, purchased and distributed ONE-QUARTER MILLION pairs of new mittens and gloves! This annual event funds the year-round work of Mittens for Detroit, a nonproﬁt with the sole purpose to collect, purchase, and distribute new, unused mittens and gloves to children and adults in need in Detroit and other underserved communities. We work with a Partner Network of about 100 programs, nonproﬁts, organizations, shelters, schools, and so on, who distribute the pairs to their clients, students, and families.