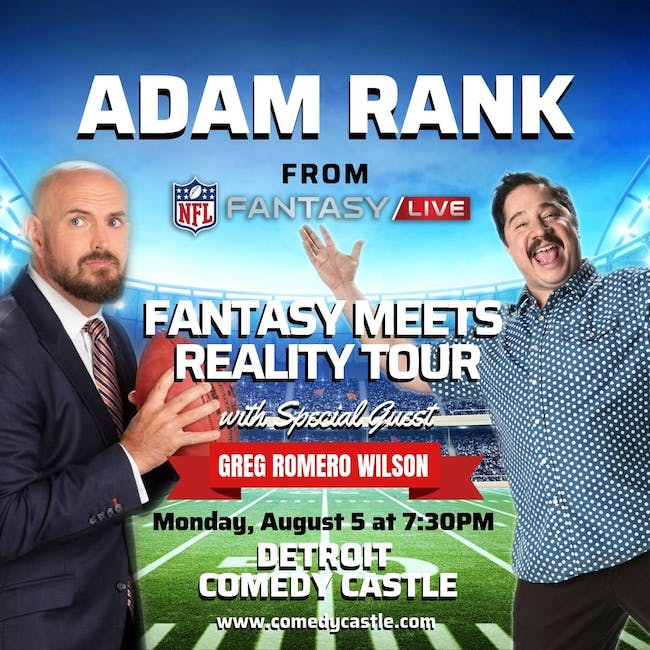 Rank hosted EA Sports Madden NFL Live, The Weekender and was a contributing member of NFL Total Access, NFL AM and NFL HQ since he joined the network in 2007. He is also a key contributor of NFL Film’s Top 10 series.

Rank joined the NFL Network from The Orange County Register where he covered professional and college sports, including the NFL, Los Angeles Angels, Los Angeles Clippers, Anaheim Ducks, USC, UCLA and Orange County preps. He has also been published in the Los Angeles Times, New York Times and the North County Times. Rank also made on-air appearances on Kennedy on Fox Business and Now We’re Talking from Go90.

Rank was born in Chicago and was raised in Corona, California. He is a graduate of Corona High School and Cal State Fullerton where he earned a degree in journalism.

Greg Romero Wilson recently starred in the FOX sitcom "Ghosted" opposite Craig Robinson and Adam Scott. Greg's done stand-up on Showtime, FOUR episodes of "Comics Unleashed" and "Comedy.TV". And you know those TV shows where comedians bag on various TV and Youtube clips? Greg's been on almost all of them! 3 seasons of "World's Dumbest Criminals" on TruTV, 2 seasons on VH1’s "The Greatest" and random clip shows for MTV, E!, TLC and a bunch of others he can’t even remember. He’s also guest-starred on dozens of TV shows like "Modern Family", "Law & Order", "Hawaii Five-O" and "Bones".

Greg hosts his own podcast, "Fantasy Football HARSH REALITY" and is also the co-host of the wildly popular podcast "MMA Roasted". Greg is terrible at social media, but he’s on there! Just search "Greg Romero Wilson". He also has, believe it or not, a website:   www.GregRomeroWilson.com.